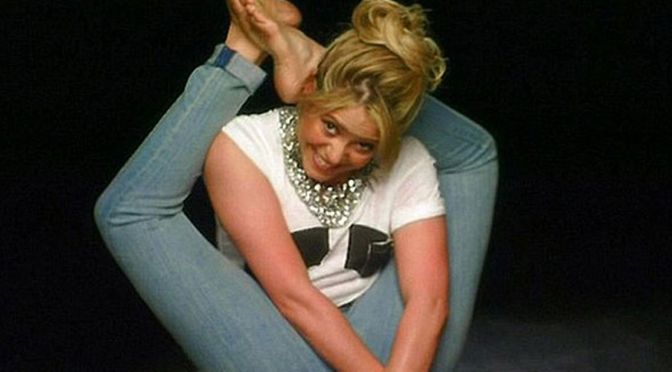 Exploring the world of hypermobile celebs.

Corrie’s Cheryl Houston is probably one of the most famous people who suffers from Hypermobility Ehlers Danlos Syndrome. Cherylee has done fantastic work raising awareness about the condition through EDS UK. She is Coronation Street’s first full time disabled actress.

Gary ‘Stretch’ Turner can stretch the skin of his stomach to a distended length of 15.8cm or 6.25in due to Ehlers-Danlos Syndrome.

He is even in the new book of Guinness World Records!

UK Singer Myleene often shows off her hyper mobile elbows. She can even play the piano backwards! 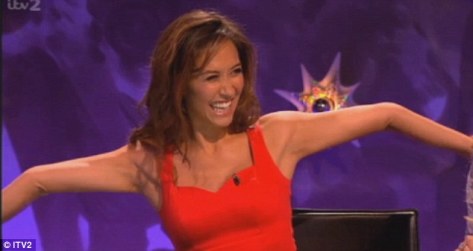 Various articles state that Kelly suffers from hypermobile hips that frequently pop in and out. Reports even suggest that the fashionista’s hips pop out unexpectedly causing her to fall over. During her stint in Dancing with the Stars she said: ”I’m double-jointed everywhere, I think that’s why I’m so accident prone. Tight jeans and high heels equals one of my hips popping out and my face on the floor. As a result of this curse, I can fall perfectly. I turn it into a dance move.” (Xposé.ie)

Ouch! By the sounds of it, Kelly suffers from a hypermobility syndrome.

The pint sized Columbian singer isn’t shy about showing off her tricks. She can pull her legs over her head which “really freaks people out”.

It is believed although not proven that historical figures such as Abraham Lincoln and Anne Frank suffered from connective tissue disorder,Marfan Syndrome.

Abraham Lincoln was 6″4. The president’s lanky build, his long, thin face, and his enormous hands and feet, sparked the notion that Lincoln might have had Marfan Syndrome. Geneticists and historians have debated this idea since it was first proposed in the early 1960s.

Anne Frank, the famous German diarist who hid in her attic during World War II is believed to have suffered from Ehlers Danlos or some other Connective Tissue Disorder such as Marfan Syndrome. When talking about P.E in her diary, she says:

I’m not allowed to take part because my shoulders and hips tend to get dislocated.

Anne’s facial features also suggested she may have suffered from EDS. Her large eyes, thin nose and lips are common features in EDS sufferers.

There is a wide belief amongst medical professionals that both Elizabeth Taylor and The King of Pop, Michael Jackson both had EDS.

Dr Diana Driscoll explains in the video below the reasons she believes Liz Taylor had EDS.

Interestingly, Michael and Elizabeth were friends. It is known that Michael suffered from chronic pain and insomnia, both of which are common symptoms of EDS. In addition to his hypermobility, it is possible to assume the late singer battled with the syndrome. Watch below from 16:40. Professor Rodney Grahame, one of world’s leading expert explains why he believes Jackson had Ehlers Danlos Syndrome.

While we have mentioned syndromes such as Marfan and EDS, it is important to note that 10% of the population are hypermobile and will not suffer from pain or complications. Many people with hypermobility live perfectly normal lives, some even use their bendiness to their advantage by taking part in Ballet and Gymnastics.

Have you spotted any bendy celebs? Hit comment and let me know!

9 thoughts on “Famous, fabulous and flexible”

Previously on The Zebra Mom

Blog posts from Adrian Kavanagh on the Eurovision Song Contest, sports and other entities!

You Are Not Alone

Views on Cork, Ireland and the world

My family and friends living with me.....and chronic illness

My Brain Lesion and Me

Once Upon a Dizzy Spell... A Story of a girl living with a neurological condition

Reflections Of A Bear

Just a bear thinking about life with chronic illness...

"Art is why I get up in the morning" ~Ani DiFranco